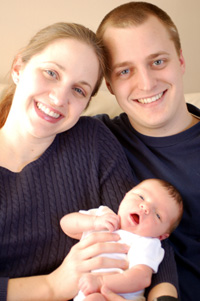 At 10:30 pm on January 13, Mike and I got into bed.  It was a Sunday, the night before my mom’s birthday…and first Monday since leaving my job.  I was feeling a little guilty about not going to work in the morning, since I hadn’t actually had the baby yet.  Laying on my right side, I felt something strange inside…2 little clicks…and wondered (with a whole lot of hope) if I was feeling my cervix dilate. I rolled to my back and felt something trickle out.  I jumped up, thinking I’d wet the bed.  We’d had a plastic sheet on the bed for 2 or 3 weeks, thank goodness!  I ran into the bathroom (ok, waddle-ran) and sat on the toilet.  I started getting excited…giddy, even.  When the trickle stopped, I wiped and saw pink goo on the paper.  I called out to Mike (who had taken 2 sleeping pills!!) and grabbed my file that the midwives had given us.  In it were the little papers to test amniotic fluid—sure enough, the paper turned black when I *dribbled* on it.  Just to be sure, I tried another piece.  “Babe…I think this is it!”

Mike went to get the phone and I called our senior midwife, Kelley.  She lives about a mile away, which we thought would be great in a snowstorm.  I let her know that my water had broken, that I wasn’t feeling much, and was going to bed.  I knew the best thing to do in early labor is just to rest and try to sleep…but as soon as I lay down the contractions started.  They didn’t hurt, but I wasn’t comfortable lying still through them.  I felt them across my lower back, like menstrual cramps, but every 5 minutes.  Every few minutes I was up and going to the bathroom, more pink mucous each time.  Eventually I gave up on sleep and went downstairs.

I spent the next couple of hours on my hands and knees, rocking back and forth.  I remember thinking that the contractions were much closer together, and more intense, than I had imagined they would be this early in labor.  I stayed calm and relaxed, picturing my cervix opening and staying wide and round.  I was going through the booklets our midwives had sent home with us…“what to expect” in the different stages of labor.  Nothing like some last-minute cramming!

Around 2 am I went upstairs and took a hot shower.  With each contraction I leaned forward against the back wall of the shower and wiggled my hips back and forth.  It seemed to be the only thing that helped with the back labor.  At this point contractions were 3-5 minutes apart.  I woke Mike, and we called Kelley again. She asked me again how long my mom’s first labor was (7-8 hours).  I told her that I didn’t want everyone to come over too soon, and that we would call her in an hour.  Mike went to get the tub set up and I kept laboring.  The cats kept me company (they could tell something was going on!) and eventually Kelley called and said she, Audra and Jill were on their way.

Kelley showed up first.  Audra came about half an hour later (5 am), and Jill (our apprentice) showed up around 5:30.  They sat in the office (where Mike was setting up the tub) and worked on my file.  For a little while Kelley sat with me, and monitored how close together and how strong the contractions were.  “They’re coming pretty close together, aren’t they?”  I just nodded, and she left the room.  Audra periodically checked the baby’s heart rate with a Doppler.  Mike brought me some dry cereal and juice.  I had picked out this juice *just especially* for the birth…the expensive stuff, no store brand for me!  It was sweet…syrupy sweet and I couldn’t drink it.

The contractions were starting to move around to my belly now, and were much more intense.  They were coming every 2-3 minutes, and it was hard to stay calm and relaxed…until then I had been able to relax every muscle in my body that I had control over, and allow all my strength to go to those muscles that were contracting beyond my control.  When the pain moved to the front, this became much harder.  I started to feel nauseous with each contraction.  Eventually the *large diameter bowl* we’d gotten (per the birth kit) came in handy…I got sick (birthday dinner, yuck).  Mike went to get Jill but she was already on her way.  She rinsed the bowl (what a pro!), I got up and brushed my teeth, and got my second wind…I felt much better—refreshed, even.

It took Mike from 3 am until around 6 am to get the tub filled and ready.  Our water heater really only allows for about 15 minutes of hot water, so it took forever to fill a 2ft x 5ft tub.  When it was finally ready, I was definitely ready for some relief.  I crawled down the hall to the office and climbed into the water.  It was immediate relief…it felt GREAT!  I just immersed myself in the water and reclaimed a little control over my body.  I got back onto my hands and knees and leaned against the edge of the tub.  After maybe 20 minutes I was feeling pretty intense contractions, every 1-3 minutes.  It was getting hard to take slow, deep breaths during them…I just wanted to hold my breath but knew that was the worst thing I could do. I asked if I was going to be checked soon.  Jill told me they typically check you when you feel ready to push.  I asked if she would check me now; I needed reassurance…I needed to know that I was somewhat far along…the pain was getting pretty intense, and if I was only 3 centimeters I was going to cry!  Jill put on gloves and checked me.  “Mmm…you’re a 9.”  Hallelujah!  Nine is a fabulous number, indeed!  I was hoping to at least hear 5 or 6.  “Good job Lindsey, you’re almost there!  The hardest part is over!”  Ain’t that the truth.

Around 7 am (an hour after getting into the tub) I was ready to push.  It wasn’t even something I had any control over…my body was pushing even when I wasn’t, and Kelley told me just to let my body do the work if I wanted.  Each contraction I pushed twice, for maybe 5 seconds at a time.  The second push always stopped short because of the stinging and burning I was feeling.  I really did not want to tear, but I felt that by cutting my pushes short I wasn’t progressing anywhere.  Jill checked after each push, and Audra told me that each time they could see more of the baby’s head.  Audra continued to check on the baby with the Doppler (it was waterproof), and I reached my hand down continually to confirm that I was actually moving things along.  I moved to a squat position, and felt a little more in control.  Kelley opened the blinds to let the light of the morning in.  It was a cold morning…tiny wisps of snow in the air, just as we’d predicted.

When it came time to push the head out completely, I panicked a little.  The stinging, burning feeling was really strong, and I felt like things were going to rip away from my body.  At one point I gasped and started to close my legs…I later learned that the head was about halfway out…right at the widest point at the ears.  My midwives were there to stop me, and to remind me to breathe.  I stopped and took a few deep breaths and pushed a tiny bit, and the head came out.  Jill announced that the cord was around the neck.  She tried to unwind it, but it was on there tight.  At this point Mike accepted the fact that he wouldn’t be catching the baby.  Jill scooted over and Audra took over the job of catching.  With the next contraction, I barely pushed at all, and the body came tumbling out.  It was 8:08 am.  Audra directed the baby down and back, so as not to pull the cord too tight, and spun it under the water to unwind the cord.  I reached down and pulled our baby out of the water, onto my chest…eyes wide open, staring up at me.  I couldn’t believe it was over!  I was so excited, so relieved and so proud.  We just laughed and caressed the baby, until eventually Mike said “what is it?!”  I lifted the baby up in the air and we saw he was a boy.  “We knew you were a boy!”

A few minutes later I was ready to get out of the water.  I climbed into a chair in the corner of the room (it was covered in puppy pads to avoid making a mess) and we were covered in sterile blankets (we’d baked them in the oven a few weeks before).  I called my mom: “Hello?” “Hi.  I had a baby!”  Jill checked me for tears (none!), and eight minutes after delivering Cameron, my placenta came out, and Jill set it up in the other bowl we had ready.  We delayed cutting the cord to make sure all of Cameron’s blood got back to him, and just sat and looked at him for a while.  He really didn’t nurse a lot…just licked and played around with my nipple, but was very alert and looked back at us, fussing a little and telling us his side of the story.  After about an hour we got up and Mike took the baby to get checked out while I took a shower.  When I got out of the shower Audra was checking on baby Cameron, and everyone was shocked to find that he weighed 8 lbs, 2 oz!  We just thought he would be smaller, as my belly never seemed to get that big…Audra even admitted that I hardly looked pregnant from behind.

I wrapped Cameron in my robe and we got into bed.  The midwives left, with a promise to return the next morning.  Cameron fell asleep on my chest and stayed that way for 12 hours!  Mike and I spent that 12 hours watching him and introducing him to our cats and dog.  I woke him occasionally to nurse, but he really just wanted to sleep.  We were at peace…we couldn’t believe the night we’d had.  While we probably should have slept, there was no way we could wind down at this point.  We had my family over to visit eventually (Happy Birthday, Mom!). J  Labor had been exactly what I’d wanted.  Not too fast, not too slow.  I’d wanted to remember every detail, and have time to enjoy it for what it was.  It hurt, but not that bad.  It was the amazing experience that we wanted it to be, and we were so happy we’d decided