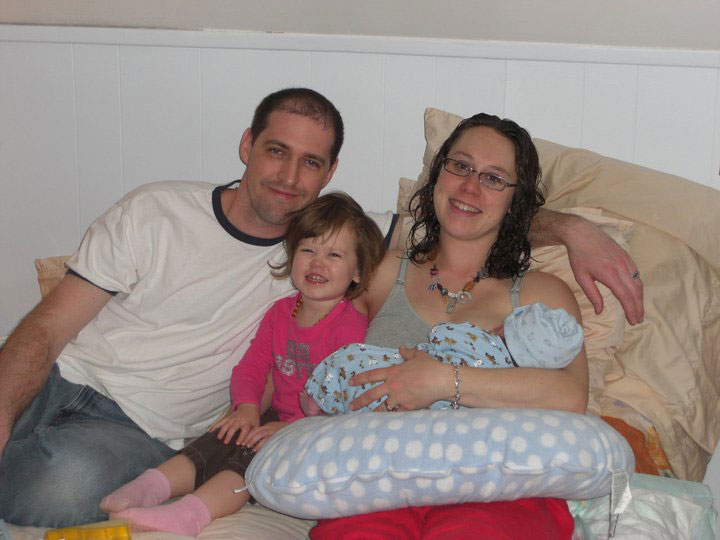 Despite the outside appearance of a perfectly wonderful home birth with my daughter, it was somehow very traumatic to both her and I when coupled with a difficult postpartum period due to colic and food allergies. We were all healthy when she was born, yes, but definitely not happy. I’ve comet o realize that no matter what the situation is surrounding your labor and birth, or what it appears to be, that doesn’t make it ideal. My daughter, Liea, entered this world screaming her head off and didn’t stop for quite a long time. She didn’t nurse well for weeks, but somehow we made it. For the birth of my second child I wanted to make sure it was different. The first time around I thought a water birth was gross and most definitely not for me… this time I knew I had to have water and my one goal was to give birth in it. I read Ina May’s “Guide to Childbirth” over and over again during the pregnancy and really embraced it this time. I knew if I read it enough then I would remember it when in labor. I had contractions all night Wednesday night which kept me awake and I had to sleep in a chair downstairs that night. I had just been at my prenatal appointment with Abby that evening and Olen was moving around like crazy! She said, “He must have a lot of room to move around in there” to which I replied, “Does that mean he’s little?” I was SURE he was going to be smaller than my 7 lb 2 oz daughter because he was so active and I never felt like my belly got that big this pregnancy. Abby then said, “I won’t make any bets.” Thursday nothing happened at all, but then Friday morning I started losing my mucus plug and having bloody show. I was excited because that’s exactly what happened with my daughter‘s birth with my water leaking and contractions following later that day. Neither of those latter two things happened. I ran some errands and kept changing maxi pads with more bloody show. 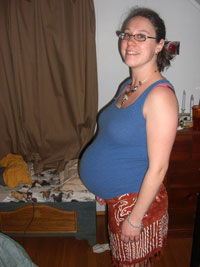 I went to bed that night and actually slept well for as well as a 39-40 week pregnant woman can sleep. I awoke at 5am on Saturday the 16th of April to a *pop* in my cervix and fluid running fast soaking that maxi pad. I leapt from bed (sort of) and got to the bathroom where I lost a bunch more fluid. I felt shaky and had chills- a very weird experience that I hadn’t had before! No contractions so I went back to bed without saying anything to my husband. I had a contraction that felt horrible so I tried to sit up in bed to see if I could keep resting that way. Darren, my husband, woke and asked how I was doing. I told him my water broke and he sleepily said, “So what does that mean for us right now?” (He was hoping for more sleep!) I told him I wasn’t having regular contractions so I didn’t see the need to fill the tub until then and I was going to try to rest. Another contraction that was strong enough to make me get out of bed. I figured I’d get breakfast and call the midwives while Darren took a cool shower (can’t waste the hot water) and got the tub filling. I called Audra but told her not to come yet as I had only had two contractions about 10 min apart. 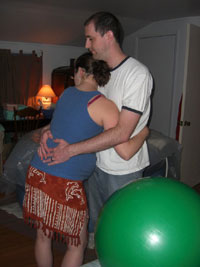 Off to the kitchen for a snack while texting my friends, Tanya and Meredith, who were going to attend the birth and be there for Liea. I decided to make peanut butter toast but then took one bite and could not go on. I tried a Luna Protein bar instead… chewing and swallowing between contractions which were rapidly becoming longer, stronger, and closer together. I mentally freaked. I called Audra back and told her the contractions were already 4 min apart and I was freaking out because I thought it would go fast. She was so calm! She said that we knew the baby was coming sometime soon and Abby lived far away so they would just go ahead and come over. I texted Tanya and Meredith again and told them they should probably come soon! I tried to let our dogs out to potty, but only got one of the two dogs in and out before I had to use the bathroom. Audra arrived during that time and I went right upstairs (sorry Toula dog… you’ll just have wait). We took a couple belly pictures and I decided I needed to reapply deodorant (I was blazing hot). I couldn’t even walk to the bathroom without hanging on Darren during a contraction. Meredith arrived and took over picture-taking duty with Tanya and Abby arriving after. The contractions were getting so strong and the tub was filling SO slow. We ran out of hot water and had to wait to fill it some more. Meredith went to heat water on the stove after the second try at filling the tub. I was having back labor and Abby and Audra were applying hot compresses to it during contractions. The tub was maybe 2 feet full and I thought I would cry. I told them I wanted my tub! Audra asked if I wanted to try and get in and I figured I might as well. The contractions were so intense and I felt like I was making SO much more noise than I had with Liea. 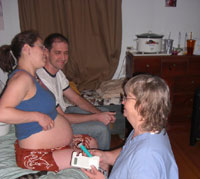 The water provided a few minutes of respite. I moved around trying to get comfortable during the next few contractions. The water came up over my back if I sank down in the tub far enough and it felt so good. Pretty soon I felt the urge to push and told them so. I was assured that if my body wanted to then I could and to just listen to what it was telling me to do.  I was on my hands and knees and had to flip over for Audra to check and make sure my cervix was out of the way- very much so! I think his head was well on its way down! After the next contraction I said “I don’t want to do this again, but I guess it’s too late.” I really felt comfortable this time telling everyone what was on my mind and I knew from reading Ina May’s book a dozen times that I SHOULD say what I was thinking to get it out in the open. Abby got down near my head and said, “Let’s make this a slow and gentle birth for Olen” and that’s exactly what I needed to hear. They knew that was my goal since Liea hated her entrance and I wanted this to be different. I took my time pushing and waited for my body. I only pushed for as long as I wanted to with each contraction. This time I could really visualize what was going on and how Olen was progressing down which helped me feel it too. 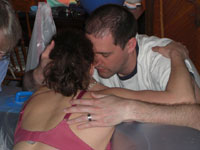 I knew from Ina May’s book that it would help immensely if I felt the head and provided perineal support for myself. My other goal this time was to not tear at all. When Darren left his post by my head to go and catch Olen, Tanya took his place. She knew from our conversations previously that I didn’t want everyone leaving me and staring at my butt! Her hands were so cold and felt so good on my arm and forehead- it was such a relief! I was so proud of myself that I remembered all the things I had read and reread in Ina May’s book about when to push and when to slow down and how to slow down when the head is crowning and you have a burning sensation. Since I was feeling exactly what was happening and the head coming through it felt so tiny to me! I even said so after the head was out! It took a moment or two before I had another contraction to get the shoulders out and the midwives coached me to try and get him out with this contraction. It took a lot more effort than I would have thought but then he was out with a rush of water and passed under me to hold at 7:25am. I settled into a sitting position to hold and bond with my *tiny* little baby. He was coated in vernix which made Abby think he could be a couple weeks early based on that alone. He was so calm and peaceful… EXACTLY as I hoped it would be. 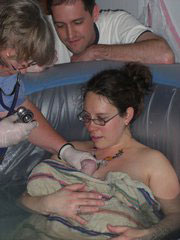 We sat in the tub for a bit with warm wet towels covering his body tight to my chest- skin on skin. He fussed a bit when we had to get out and drop all our wet towels, but the warm receiving blankets quickly quieted him. Once we were on the bed I had to do my least favorite part- get the placenta out. It took about 20 minutes or so, but Olen helped out by latching on and nursing (a wonderful blessing after what I went through with my daughter trying to get her to nurse). A few good pushes and it was finally out allowing us to have our family bonding time. Speaking of family we were missing Liea- she had slept right through it all! At about 8:30 we heard her over the monitor in our room and Darren went to get her.  She came in holding a teddy bear that was “Olen’s bear” which she had been taking care of for him and she was so excited! What a sweet time together with our new family. She wanted to hold him of course, but he was still latched on and nursing and the cord still attached. Soon Abby and Audra came back to cut the cord and get me off to the shower. 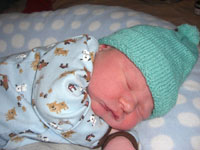 When Audra checked me I had a tiny tear on the inside of the vaginal wall off to the side. Not too bad and this time around I would have never known if she hadn’t told me. Recovery afterwards has been completely different and almost TOO easy. We sent Liea downstairs to spend some time with Meredith and Tanya, but she got worried and ended up in the bathroom helping momma (and by helping I mean Darren was holding her while HE was trying to help me!) I couldn’t wait to get back to my little guy, but I did take some time to put some mousse and cream in my hair and apply some fresh deodorant. 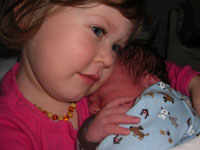 Abby took Olen to check him out (very thoroughly I might add) and do his measurements and weight. From handling him she guessed he weighed about 8lbs 8oz and I thought, “What?! That cannot possibly be true, he’s too tiny.” She proceeded to weigh him and he weighed 9lbs 2oz!!! This was a full 2 lbs larger than my daughter and I’m on the petite side at 5’5”. Never let someone tell you, or tell your spouse, that you or they can’t birth their own babies. My mom started giving birth at home because she almost didn’t make it to the hospital with my oldest brother’s birth. I keep thinking about that and how that would’ve been me this time- but I was at home and comfortable. It was planned perfectly for me. I was able to completely surrender to this birth experience and listen to what my body was telling me to do. These two things made for a completely redeeming birth and I am incredibly proud of myself. This was an empowering birth- as it should be.