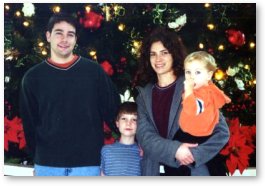 Cas Chermer received a B.A. from Eugene Lang College in 1992. She lives with her husband, Dave Schreiber, in Upper Arlington, Ohio where he teaches high school science. For the past eight years she has applied her education to such questions as, “Do cats blink?” and to the perfection of a technique for freeing the stuck wheels of matchbox cars. She is currently working on a unified field theory that will provide a definitive, universal and irrefutable answer to the question “Why not?!” The family is expecting baby number three who will emerge into the wonderful hands of a CHOICE midwife in April.